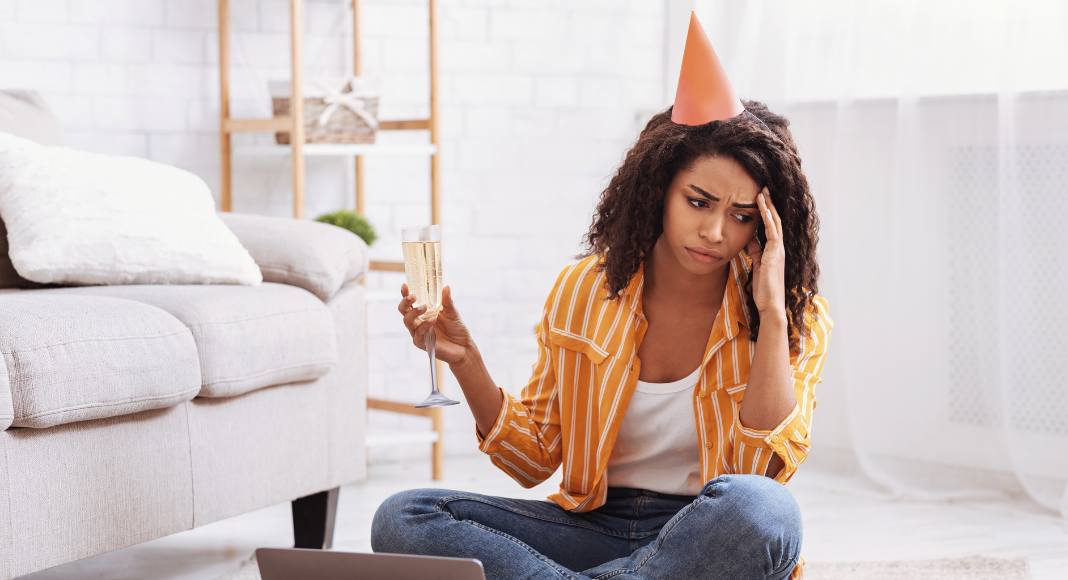 Three hundred sixty-five days have passed… an entire year since we optimistically waited for the clock to strike midnight. We had the highest of hopes for 2021. *Insert harp music, glorious rays of light, and sparkle effects.* It was to be the antidote for 2020. It would cure all that ailed us and provide the reprieve we all needed. We would have time to recover from a painful year and rebuild all that was torn apart in the previous months. Chile, we had it all wrong; 2021 came in like a beast – with a smirk, a point to prove and a deep-throated “Wassup?!” with coordinated head nod.

In my own defense, I tried to tell people that crazy and the magic that makes it – does not follow a clock or calendar. It has no respect for the deadlines created by mere mortals. Indeed, I was hard pressed to believe that 2021 would be anything other than a continuation of 2020 with new and more advanced features. Score one for this brawd.

Highs, Lows and Other 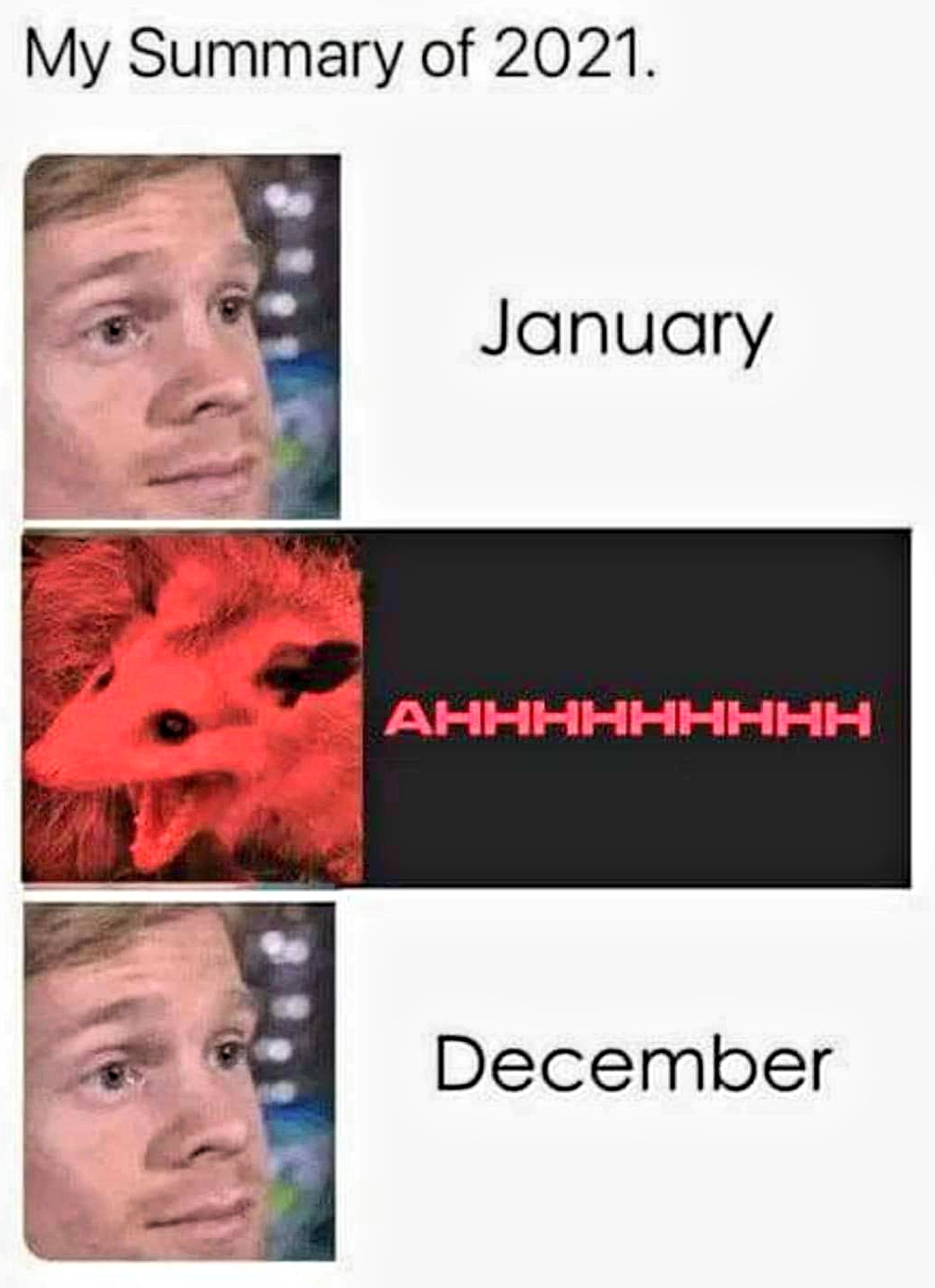 Alas, I shall not let this rant evolve into a calendar of catastrophe. Admittedly, the year came with challenges, but it wasn’t all bad. Let’s take a look back at a few random highs, lows… and probably some – we couldn’t care any less(es).

We started the year off with a BANG. There was this crazy festival thing in Washington D.C. Event: Coupchella. Venue: The United States Capitol. Everyone was super excited. There was riot gear. Wild costumes. Window breaking. Some wall scaling. Senators hid. People died. The whole beeping world was glued to the television – watching us – looking real third world country-ish.

In the same month, and on a more positive note, E! aired the last episode of Keeping Up with the Kardashians. Truth be told – this almost makes up for the Capitol thing. Later K fam. *chunks deuces*

Remember the time when 29,000,000 million Texans almost froze to death? In our own homes. Not hyperbole. You remember… when we entered the seventh circle of hell and all the pretty snowflakes *coughs power grid* tried to kill us. We were still straight up winning at this #thirdworldcountrychallenge.

Many of us dealt with the return to the office for work. In all seriousness, returning to the office was – not bad. Trying to squeeze all twenty-two of these recently acquired pandemic pounds into a pre-pandemic work wardrobe – bad. Real bad. I pulled a muscle trying to button my pants. I had to ice my wrist. Also broke a fingernail.

First world problems abound. Like… Drive-thru service takes nearly as long as dine-in service because – where are the workers?! Stupid Great Resignation. Supply chain issues mean Amazon Prime is much less prime, and good luck receiving all those Christmas gifts before the new year. Our Astros lost the World Series. And gotblessit, will the construction on I-10 ever come to an end?!

Based on current data, by 2030, we will celebrate our first Houston Christmas at over 200 degrees Fahrenheit while a hurricane ravages Idaho and a blizzard covers the Vegas strip. Okay, I made this crap up. But, Houston, we do have a problem.

Civility amongst our country’s citizens and leaders continues to devolve into something akin to an unending toddler brawl, only distinguishable by the fact that the fighting words usually contain more syllables. I’m sicka grown people. In the words of Rodney King, “Can we all just get along?”

There has been so much loss this year. Death and the grief that follows know no end. Illness. Depression. Anxiety. Suicide. The weight of it all has taken its toll on the majority of us. Unless you are a heartless such and such, it is impossible to see people around you hurting and not carry some of their pain. Admittedly, I am a crybaby. My own circumstances have been the impetus for my tears quite a few times in 2021, but I’ve cried more times for others than for myself this year.

Since the start of the pandemic, we’ve lost over 800,000 family members, friends, and neighbors to complications of Covid in the United States. The toll this year is greater than last year; this pandemic has caused more deaths than any other in the history of this country. I have no snarky retort. The loss we’ve experienced is catastrophic.

Sixty-one percent of the U.S. population is now fully vaccinated. Not unlike feral cats, we are undergoing a sort of resocialization period evidenced by awkward interactions with other humans. Too hug or not to hug is one of the most complicated and frequently considered questions of 2021.

In this season’s episode of Court TV, Kyle was acquitted; Derek, Travis, Greg and Roddie were found guilty. We, at least, seem to be moving in the right direction.

We continue to lead the world in a category no nation wants to claim the top spot. School shootings. We are number one; we cannot be touched in this category. Winning? Not at all. We’ve accepted a reality where school shooter drills are part of the school curriculum, and an entire generation of children will never know it was ever any different.

Pandas finally made it off the endangered species list. I’d rather have no more school shootings, but if we can’t save all the kids, at least we can save the pandas. Note: This is not an acceptable trade in my mind.

Lucifer, Money Heist, Squid Game, You, and The Handmaid’s Tale are included in the most popular shows in 2021. Here, we have Satan, felony theft, heinous murders, serial killers, brutal misogyny doing well in today’s society. Yay, us. I’ve watched four out of these five shows, so… I shall pass no judgment.

Good news for the top 10%, at the present time – the richest 10% own 70% of the nation’s wealth. Like the Jeffersons, they continue movin’ on up. Most of us can be content without being in the top 10%, but it sure would be nice to be able to finish a full career, retire and not ever feel the need to consider use Gertie’s Good Times meatloaf recipe in old age. So, when are these economics supposed to start trickling down? 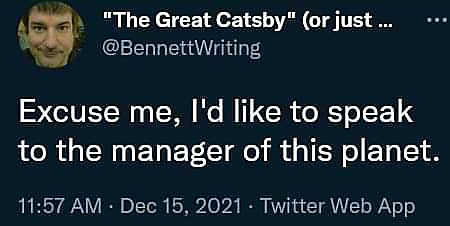 As evidenced by this list of most random parts of 2021, my head is full of… stuff. My mind and my body are tired. I know dadblasted well, I am not alone. I long for simple times; a hut on Gilligan’s Island sounds like a slice of heaven. But at this moment, I will have to settle for Some Calgon to take me away and the delivery of messages to our outgoing and incoming years.

We see you. We acknowledge all your efforts included here within and also many not included. We thank you for keeping the pandas. It’s been real. Please see yourself to the door. We good. It’s a wrap.

Please do better. We all need it. You have the opportunity to be that year. The golden one. The one that everyone loves. The one that causes us to frolic happily through green meadows singing in falsetto. The one that enters accompanied by harp music, glorious rays of light, and sparkle effects. The one that makes up for the last two.

But please know, just in case you decide to act a whole new fool and live down to your name – Twenty Twenty TWO/TOO – I’m already beginning to prepare. I have an Amazon cart full MRE’s, water purification tablets and a brand new first aid kit. And I’m about to make these kids build us a storm shelter before the spring semester begins. So, come at me.

No. Wait. Sorry. Please do not. I didn’t mean it. Kidding. I was just kidding. 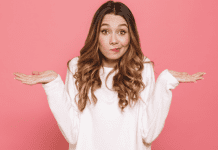 2022: The Year We Stop Making Resolutions And Start Enjoying Life 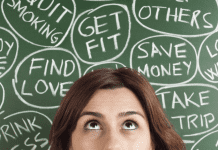 Putting Resolutions to Rest Once and for All!