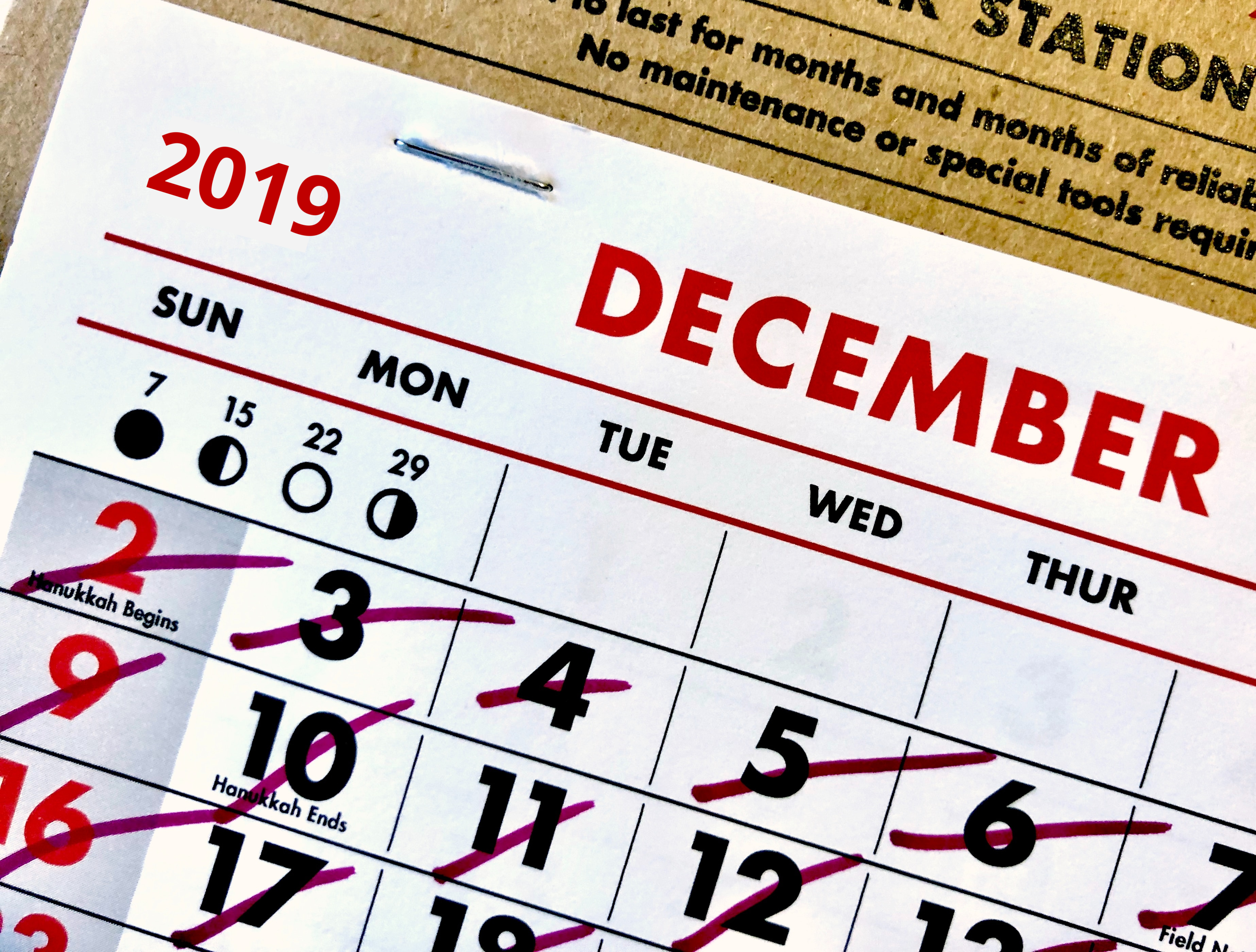 It started out innocently enough. Someone on Twitter sent a tweet noting that the 20-teens were almost at an end and prompting people to reflect on what they had accomplished in the last decade. 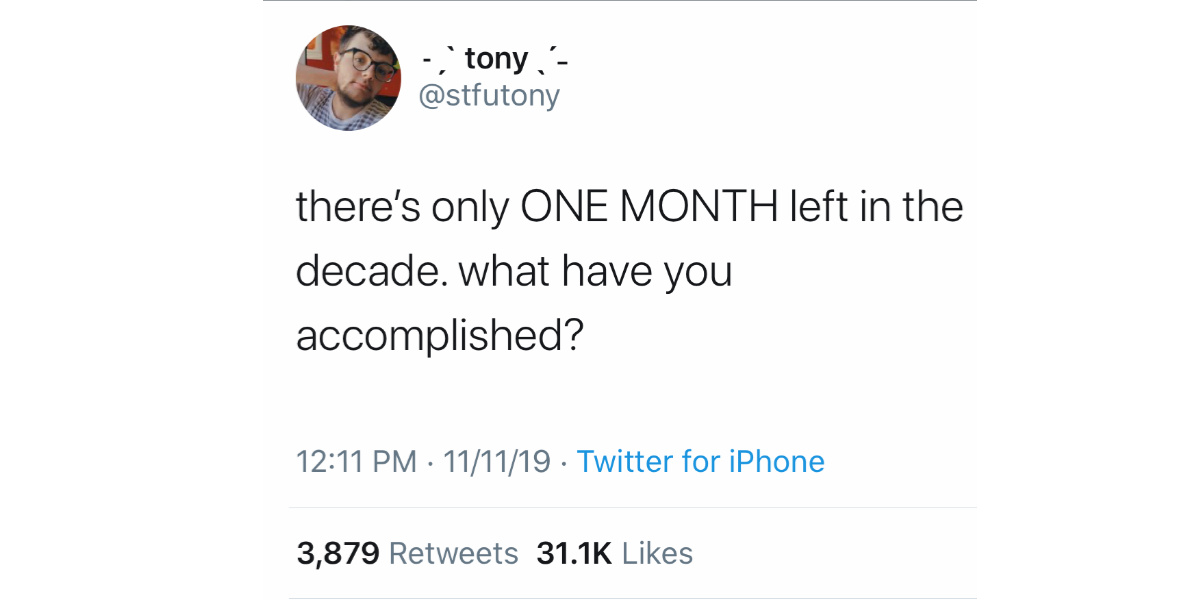 The tweet went viral with thousands of users, including mom-twitter and parenting-twitter, replying and laying out their ten-year resume in 140 characters.

Many responses were moving; people shared about overcoming addiction, surviving hardships, and emerging victorious! Others were straight-up bragging as you would expect with such explicit permission to overshare. I made the mistake of following the thread and quickly acquired a bad case of “I haven’t done enough.”

In fact, in many ways, things have gone downhill for me in the past ten years. Sure, I had another kid and I moved to another country and made new friends and experienced many blessings, but I also lost both my parents, a good friend, and my career. I’ve been through a cancer scare, and now I’m going through another for my oldest son. I have more than 5000 unread emails and I can’t keep the photos on my phone under 10 000. I’m no further ahead in my finances and I’ve gained every pound I lost in the last decade, and then some. I have had marriage ups and downs, I have celebrated parenting wins but I’ve also been in the parenting trenches where I have felt like a complete failure. How on earth would a mom like me reply to a tweet like that? I felt mounting pressure to quickly go on a missions trip or do a fast or sell my house and belongings and move to a tiny house or somehow someway get my life together in a decade-meme-worthy way! Yep, I was panicking.

Then I saw a glimmer of hope. 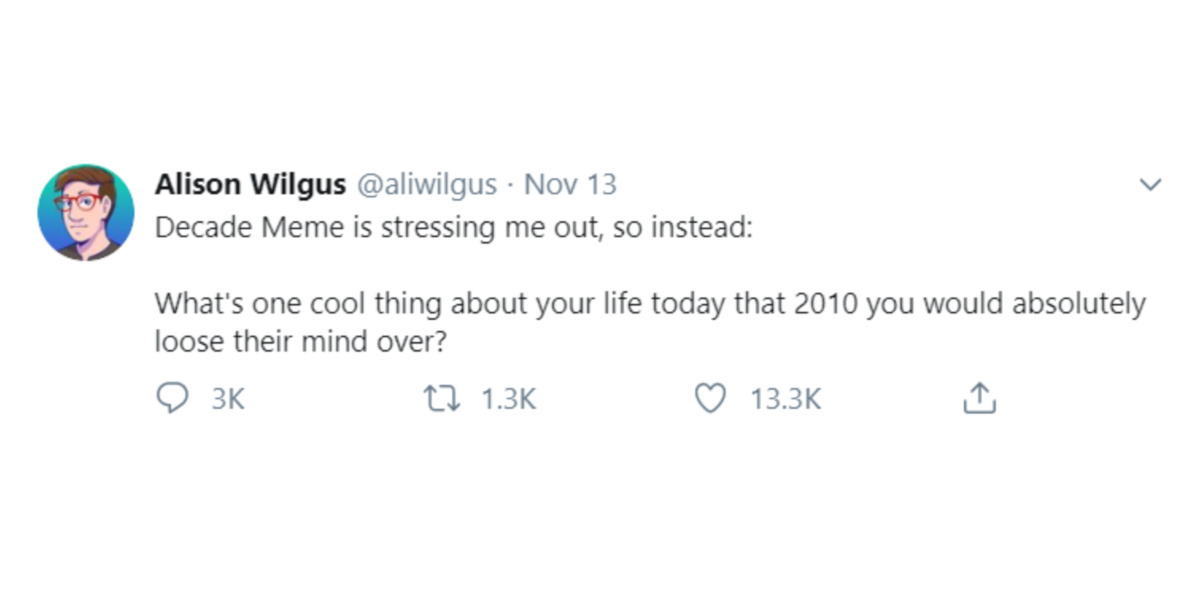 Turns out, I wasn’t the only one in a mild state of panic at the thought of tallying up the past ten years. Turns out, it inspired anxiety and stress in a whole lot of people who were otherwise going along happily without thinking of the end of the decade.

The decade meme made me think about how much our world has changed. Aside from the Y2K hysteria, anniversary celebrations and life reflections used to be conducted out of the public sphere. Now, everything is fodder for Facebook or social media. Don’t get me wrong; I believe social media can be a connector, and meaningful interactions happen all the time that would not be possible in decades past. Still, it primes even the most confident amongst us to compare and compete in an arena with no winners. 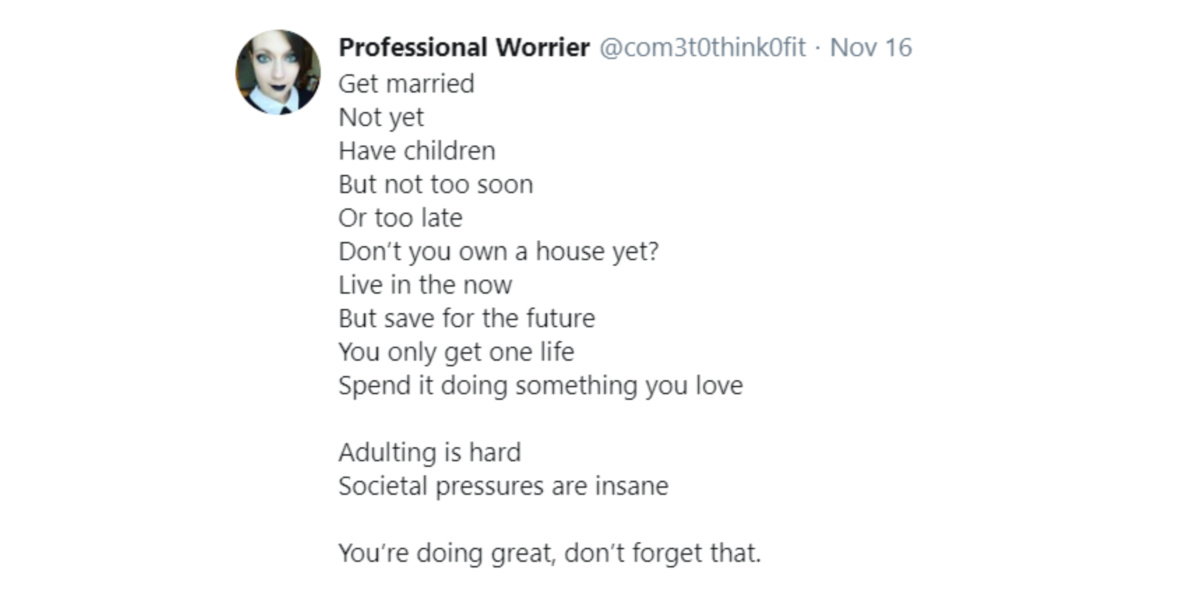 So instead of trying to come up with a clever way to {not so} humble-brag about my life for the past ten years, I’m going to follow the advice of another tweet as 2019 comes to a close:: 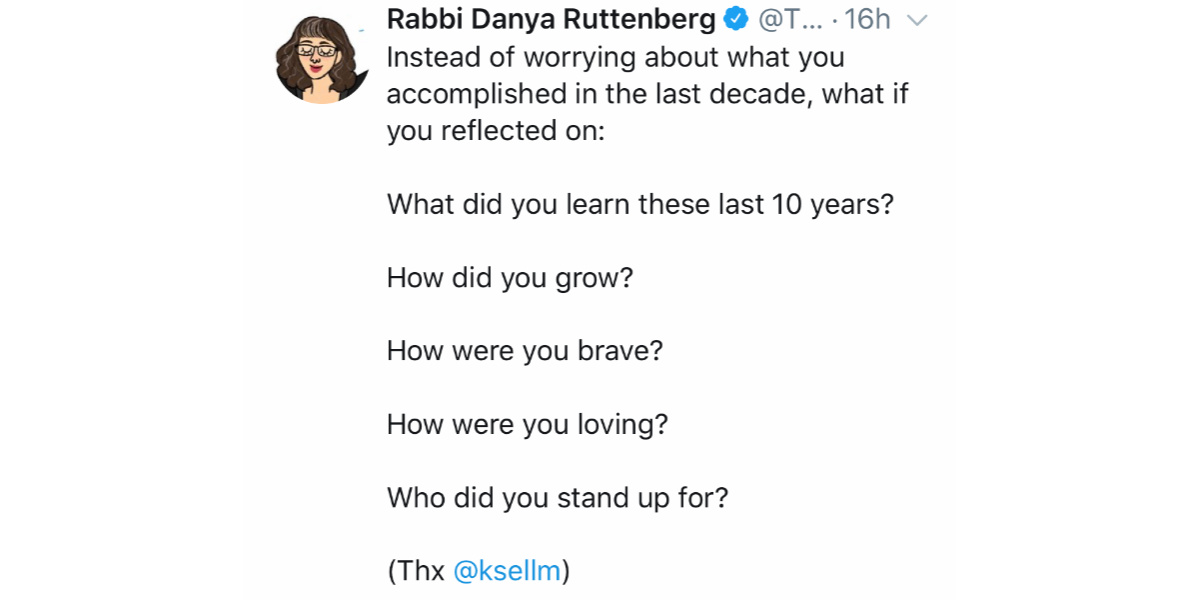 I have learned that no matter what comes across our paths, mothers rise to the challenge. In fact, we carry many burdens that we never complain about publicly. The more I read people’s stories, the more I realize how extraordinary the “average” mother is.

I grew in every realm in my life over the past ten years. I have better boundaries, I have learned new skills, and found a new career. I am a better wife, mother, friend than I was in 2009. Many things that used to bother me no longer do. I’m in my 40s, I’m Gen-X, and I just don’t care what size I am or if my house is immaculate. I’m good with who I am and how I live my life.

Bravery has meant so many things in the past decade. It meant leaving my home and moving to the unknown. It meant going on blind-friend dates and throwing myself into clubs and groups in an attempt to build a new community. It meant sticking to my convictions even when the consequences involved loss. It meant facing down the threat of cancer and now, holding my son’s hand and telling him that he’s about to get braver than he’s ever been.

Grief has taken my love for others to new depths. Losing someone teaches you in a way nothing else can to cherish others. That doesn’t mean “savour every moment” and ignore the bad stuff. It means that you get it, the temporary nature of life and the inevitable entry into the grief club. Somehow it makes relationships and experiences sweeter.

I stand for my kids – most moms do. I have had to advocate for them more than I expected in health and education. I stand for my community and for inclusion. As one in a place of privilege raising two sons, I have had to confront my bias and my white Christian upbringing and intentionally choose to do better.

There has to be a middle ground between panic and grandiosity when it comes to reflecting on your past. I don’t mean we should keep a good/bad list to prove the good outweighs the bad. I also don’t think we need to find the silver lining of every bad situation. Some things simply suck. Acknowledging that does not negate the good that might come from them. Maybe the balance is in the act itself – remembering and reflecting on whatever comes to mind IF you want to, WHEN you want to, rather than according to some arbitrary calendar date.

There is a flip side to my initial perspective on the decade meme:: choosing to share accomplishments is a way of spreading positivity. It shows our kids and families how to put your best foot forward. It gives permission to firstly recognize all those accomplishments, then celebrate them loud and proud. There’s no need to panic after all.