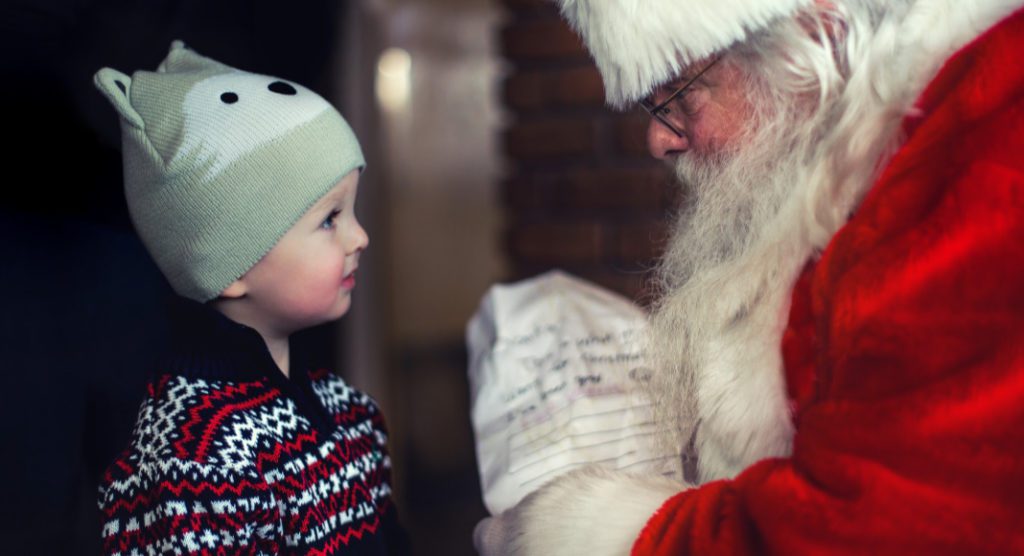 I vividly remember when I found out Santa Claus was not the person delivering my presents on Christmas Eve. I was in third grade. I’d heard some rumors from my classmates about Santa being a fake, and though I didn’t believe it, I decided to ask my parents if that was true. Their hesitant response of “yes” rocked my world. Y’all. I was devastated. I had imagined the North Pole to basically be an exact replica of Disney’s The Santa Clause, with sparkling snow, rosy-cheeked elves, and 1,200 year old hot chocolate recipes. The logistics of it all did not bother me; I was willing to concede Charlie Calvin’s guess of “there’s some sort of time continuum that breaks down once Santa’s in his sleigh.”

To find out it was all a sham? Well, disappointed would be an understatement. I felt lied to and betrayed, and I vowed to never put my kids through that. Dramatic? Perhaps. But a bit of the Christmas magic faded away for me that year. I still loved the holiday season, but, at the time, I felt like the reason for looking forward to Christmas was gone. Sure, presents from my parents was exciting too, but it didn’t have the same sense of mystery that Santa and his reindeer brought every year.

How We Celebrate Santa Claus in Our Home

So, how did I go from vowing never to do Santa with my kids, to making it part of our family tradition? Even when my son was born, I was still firmly in the “No Santa” camp, despite my husband’s hinting at how much he enjoyed it as a kid. However, as I started to learn more about my Catholic faith, I slowly began to understand the rich tradition of celebrating Santa Claus during the Christmas season. Our son is now 3 and just started asking about Santa. So, here is how we celebrate {or plan to celebrate} Jolly Old St. Nick in our house.

Santa was a real person. This fact is probably one of the main reasons that swayed me over to the Santa side. Saint Nicholas, or Santa Claus, was a real, historical figure who was born in Turkey in the 3rd century. He was ordained a priest as a young man, and then later a bishop of Myra in 317.  He was known for his generosity; he had a special place in his heart for the poor and needy.

So, when I talk to my son about Santa Claus, I tell him about St. Nicholas. The two figures are one in the same. And because the Catholic Church recognizes him as a saint, that means we believe he has an everlasting soul and is in heaven with Christ. So when I tell my son that Santa exists, I firmly believe that to be a true statement. I also tell him that, as a saint, St. Nicholas loves Jesus, and he wants to help us celebrate His birthday by giving gifts to boys and girls. Naturally, St. Nick understands that some boys and girls do not celebrate Christmas or have different cultural and religious traditions throughout the world. He’s fine with that, and so are we.

We focus on giving, rather than receiving.

As I said above, St. Nicholas was known for his giving nature. One of the most famous legends surrounding St. Nicholas involves his immense generosity. When his parents died, Nicholas inherited their fortune. Because he preferred to live simply, he decided to share his money, anonymously, with a poor father who had no money for his daughters’ dowries. Thus, the story of Santa Claus was born. While we don’t know the particulars of the different people with whom St. Nicholas shared his wealth, we DO know that he was a good and faithful bishop, who was known for helping the poor and in need.

So, my current role as “St. Nicholas” allows me to practice giving anonymously, without any recognition. When my son is really excited for a gift, this is particularly challenging! I also want him to focus on giving generously of his time, talent, and treasure {age appropriately, of course} to others. This will be the first Christmas season where he is old enough to understand this concept, so we plan to participate in toy and clothing drives for needy children. We will make a special trip to the store for him to pick out gifts only for others and not himself. In this way, he also gets to practice being St. Nicholas, giving without acknowledgement or reciprocity. When he is old enough to understand who is really bringing presents on Christmas Eve, we plan to transition him to being a Big Kid Helper for our younger kiddos. Our hope is that, by focusing on St. Nicholas’ giving nature, he will enjoy the switch from receiving from Santa, to honoring his generous spirit in giving to his siblings and others. 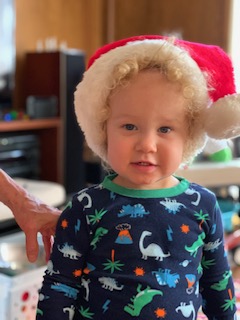 I said earlier that I felt like Christmas lost a bit of magic after I found out the truth about Santa. I no longer feel that way. Firstly, I defy anyone to not feel like Christmas is full of magic when you watch a 3 year old experience it for the first time. Go ahead. I’ll wait.

Secondly, the focus of my Christmas season is a bit different now than when I was a kid. As a Catholic, I’ve once again found that sense of awe and mystery in the Incarnation of Christ. I believe that recognizing and celebrating the tradition of Santa Claus helps point us to the miracle of God taking the form of man for our salvation.