“Yes, Ma’am, we have your credit card right here. We’ll hold onto it until you can come pick it up. When would you like that to be?”

Tomorrow, I thought. Tomorrow would be easier, because tonight was full. I had plans, plans that included a mountain of laundry, a stack of dishes, and a vacuum cleaner. It was 7 PM, and my lack of a brain wasn’t in my plans. I had work early in the morning, I had no gas in my car, and I hadn’t yet gone grocery shopping for the week. I needed my card.

Still, for a second, I hesitated. The stress that had been building from life, incomplete tasks, and single motherhood rose up, sucking the air out of me. 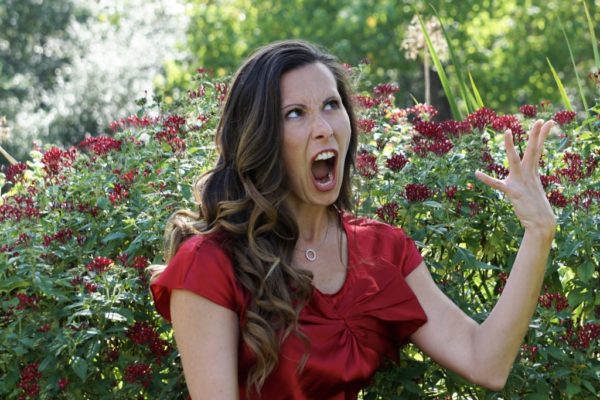 “Mommy? Do we have to go back to the restaurant?”

There it was: the true source of my hesitation. It would take another thirty to forty-five minutes to pack up my tiny human, drive to the restaurant, unload us from the car, walk in to to grab my card, get us back in the car, drive home, and finally begin our nighttime routine. A nighttime routine that consisted of baths, teeth brushing, book reading, and night-night prayers. This was not how the day was supposed to go, and, as always, I was the only person who could solve my problem.

“I’m headed that way,” I responded, reaching into my wallet to retrieve the driver’s license. I pushed the card into the pocket of my scrubs.

After hanging up the phone, I shrugged at Tiny Tot, who groaned and threw back his head. This was not part of his plans for the night, either. He had plans to look through Pokemón cards and watch Dinotrux before the nighttime ritual began. I told him to go potty, moved about in a panicked haze, removed my sunglasses from my scrubs, and placed them on the dresser.

On the way to the restaurant, I mentally prepared myself: Hi, I’m J.M. This is my license to prove my identity. Please, please, please give me back my credit card. I reached into my scrub pocket to pull out my license, and then stared, with blank shock, at my hand. I put my hand in my pocket again. Nothing. I dug around on the seat. I turned on lights in the car. I reached between crevices. I shifted around like a lunatic.

First my credit card, then my driver’s license. All in one night. All on a night that was supposed to go as planned, and create a sense of peace and harmony in the maelstrom of the last few months.

Panic set in on the way back home after retrieving one of the missing cards. I remembered pulling my card out of my wallet. I remembered putting the card into my scrub pocket.

With all of the stress that I had held onto as of late, was I able to remember anything? I felt myself cracking at the seams, and I needed one thing to go right … with everything else going wrong.

Unfortunately, and unwittingly, I placed my tiny human at the center of that “something.” I needed him to follow directions, to listen to Mommy, and to not make a wave in the turbulence of my emotions.

“Okay,” I said, after we walked into the house, “Mommy is going to look outside for her license. During that time, I need for you to get bathed, get in your jammies, and hop into bed.”

He chirped an, “Okay, Mommy,” which made me believe I could panic without also having to discipline a child in the process. I walked outside, flashlight in hand. My license wasn’t in the driveway. It wasn’t inside the car. As I started to look in the grass, I tamped down tears of frustration, overcome with the fact that life never seemed to go as planned.

Suddenly, the screen door opened, producing a tiny human with his own flashlight.

“I’m coming to help you, Mommy!” he said, oblivious of the fact that I needed for him to heed my words without question.

He hadn’t bathed. He wasn’t in jammies. He hadn’t listened to me, the mom. The panic in my heart meshed with a semblance of outraged Mommy anger, and I felt myself begin to melt down. “No, no! Son, go inside. Do what Mommy asked. Go take a bath,” I ground out. My tone was sharper than I had intended.

“But, I want to help,” he whined. This was the worst possible moment to argue.

“Get inside the house. Take a bath. Now.” I stated, teeth clenched. My license was missing. My kid wasn’t listening. Nothing was working out, and I was losing my mind.

I hustled him inside the house, ordering him to do the tasks, again. Instead, he ran over to the couch, flopped down, and said, “I’m not dirty. I’m not taking a bath. I’m sleeping on the couch tonight.”

Hysteria had already set in, but it was fueled by that tiny little voice, with an opinionated mind of his own, warring with me. He had picked the wrong day; he had picked the wrong time. I hollered something about doing what I said, pointed an enraged finger toward the bathroom, and blazed fury from my eyeballs. In response, he erupted into a mountain of tears and ran from the room, heart-broken at his mother’s indignation.

I had melted down; I had lost it. All of my stress and exhaustion of working two jobs as a single mom had surfaced as The Big, Bad Mommy at my child.

I stomped into the bedroom after crying to my own mother about what had happened. It was going on 9 PM. As soon as I reached my bedroom door, however, I deflated. There, on my dresser, tucked neatly under my sunglasses, was my driver’s license.

A Moment of Single Mommy Clarity

He was hiding under his bed when I found him. I pulled him into my lap and explained that, when mommies get too overwhelmed, they need tiny humans to do what they’re asked. I said that my anger wasn’t his fault because Mommy could normally handle not listening with a warning, but there were too many things going on … and Mommy was overwhelmed.

It’s been hard, as a single mom, to remain calm when the mountain starts to fall. I’ve been single momming it for almost six years; yet, at times I still fail. There have been moments when the enormity of doing everything alone gets to me.

That’s always been the main issue: there is no help, at the end of the day, in single momdom. No one has been there at 2 AM, when vomit {or pee} covers the bed. No one has been there when it’s midnight, the child was hauled into the house asleep, there is guilt from working late nights to make ends meet, and there are no clean socks. The entire household relies on the one person who knows she’s strong enough to do everything, but who also doesn’t know if there is enough willpower behind that strength.

What I’ve learned in my meltdown moments, the ones where I hurt Tiny’s feelings, is that I have to make it right with him. I have to admit that I am wrong, and that I can be wrong. The meltdown moments have shown me when I need help, but they’ve also helped me show my child that, even though I was angry, and even though I’m the adult in the situation, my position as Mom does not make me exempt from apology.

He forgave me, as he always does. I didn’t push him to apologize, like I normally do. I had been a fire-breathing dragon, which made me more wrong than him.

The next day, out of nowhere, my tiny son came up to me, hugged me, and told me he was sorry for his behavior the day before. I thanked him, surprised at his precociousness. His actions told me that, even if I have another epic melt down, we’ll weather the storm.