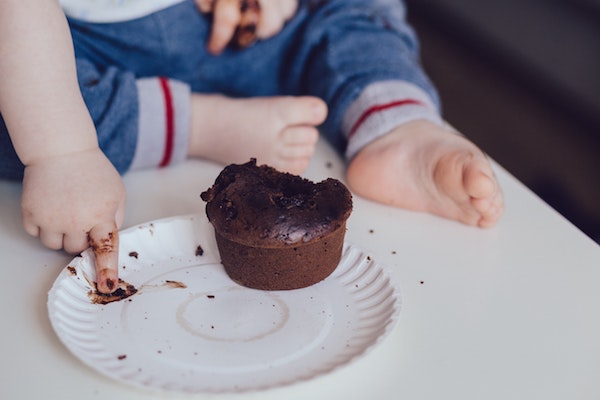 I have three children. I only grew up with one sibling, so it always seems like a party with three kids in the house. It’s not an especially large number, but it is not a small one either. It does mean I have parented through the early stages several times now. So when my third {and decidedly last} came along, I was pretty confident I would mother him the same way I did the first two. Since we had three kids in five years, my husband and I were still flexing all the appropriate parenting muscles. We were sure that we could easily continue setting firm limits. Welcome to this tight and well-run ship, Baby Number 3!

But we forgot about something. He’s THE BABY! THEY’RE the ones that run the ship!!!

Repelling A Sweet Tooth, Or Not

It’s true what they say. It really is hard to say no to “the baby” of the family. For some reason, it wasn’t hard to say no to our very first baby though. When my oldest was just a toddler, we would reward him with a rare treat now and again. This treat consisted of a single Animal Cracker. Yes, just one. We did not want him to develop a sweet tooth so we did not give him sweets. Animal Crackers seemed like a good compromise.

He would eat his treat slowly, nibbling the edges with patience, trying to make the pasty little tiger last as long as possible. I don’t remember him ever asking for more—he knew there was only one at a time. We were proud of ourselves for our discipline. At some point however, we learned that one of the regular snack items in rotation at his Mother’s Day Out program were Animal Crackers. It turns out he was probably eating a couple pounds of sweet zoo creatures a week. We tried.

“The Baby” of our family is now three years old, the same age my oldest was during the Animal Cracker Delusion. Last weekend our entire family attended a birthday party. The Baby ate a cupcake and then he asked for ice cream as well. I served it to him with a napkin and a spoon and a little pat on his adorable head. It never occurred to me not to let him have both. It was a party, after all.

It’s not just the sweets. I’ve somehow lost my grip on screen time with The Baby as well. So, you know how they always ask about it at the pediatrician’s office? Well, The Baby’s last check-up went something like this ::

Doctor :: Do you limit him to less than 2 hours of screen time a day?

Me: Oh, what was that? Total in a day? {Nervous laughter} I thought the guideline said two STRAIGHT hours a day. Just add breaks for snacks, I thought? Healthy ones of course. Are Animal Crackers OK?

Even though I owe much of my sanity to kids having some screen time {sometimes it’s either screen time, or I will scream time}, our family sets limits. We don’t have an iPad although we do have a tablet that is limited in its offerings. My phone has no games. In desperate circumstances, I’ve handed my phone to my kids who can only scroll through the photos. Luckily, I have 10,000 photos in there.

My almost 9-year old’s first experience with electronics was a LeapFrog educational toy. He played with that thing for years until we bought him an actual gaming system last Christmas after years of campaigning on his part. The Baby beat him at Mario Kart yesterday. I will say nothing further on this topic.

Sleep is a topic that is completely non-negotiable in our family. We sleep train early, we do not co-sleep, and all children of appropriate age nap properly in their own bed every single day. Sleep affects brain development as well as children’s mood and behavior. We do not mess around with it. We are militant about sleep because children who sleep well also allow their parents to sleep well. It’s a quality of life issue. I came out of my room one morning and overheard The Baby walking around, saying “Whatever you do, don’t wake up Mommy.” I’m happy to learn that his older siblings have been training him well.

But I have a confession to make. I started doing something this summer that I never allowed myself to do with any of the older kids. I told my husband I was thinking about doing it. He warned me not to open Pandora’s Box. Be strong, he said. You don’t know what might happen, he said. We have to find other ways, he said. But I couldn’t help it. I did it anyway. And I’ve done it again and again. I have been napping with The Baby. {Dun, Dun, DUNNN!}

When we upgraded The Baby to a twin-sized bed this summer, I made the off-hand comment that it was big enough to fit two people. So shortly after he upgraded his bed, my sweet boy’s scrumptious little face looked up at me and asked “Mommy, can you sleep in my big boy bed with me for nap time?” What is a mother of an independent 3rd grader, a sassy 1st grader, and a relatively tiny preschooler to do?

So, a couple times a week, I have been napping in The Baby’s bed with him. He is so silly and funny when we are laying there together on his cotton dump truck and airplane sheets, chatting about silly things before the afternoon lethargy overtakes us both. In fact, life is more silly and fun because we get to parent this precious third child.

The other day as we were preparing to go outside to the pool, The Baby looked at my husband and asked “Can we eat ice cream right now?” We had been allowing the children to eat ice cream bars before we jumped into the pool this summer. It was an act of mercy, a reprieve from the stifling heat of the late afternoon. But the kids seemed not to eat well during dinner on those days, so we had made a big to-do about it and told everyone that ice cream is only for dessert from now on. “Please, Daddy?”, The Baby pleaded.

My husband and I locked eyes. I send a telepathic message. “Tell him no. Hold the line. Steady now! HOLD THE LINE!” But he crumpled under the cuteness. “Sure,” he said as he shrugged at me, reaching for the freezer. “So weak!” I thought. I sighed. “Hand me one” I said. Everyone cheered. I guess with our Boss Baby, it will always be a party after all.