I’ve decided that, as a mom, I’m no longer going to say… “I’m never going to do THAT.” Because on several occasions, I’ve eaten my own words.

I’m never going to feed my kid Goldfish crackers. Well, guess what they just had for a snack?

I’m never going to let them watch an ounce of TV. And guess what gives me 20 minutes to get ready? {Hint :: It’s Daniel Tiger.}

My most recent “I am never” was the idea of using safety harness backpacks on my kids in public.

I’m the mom of 21 month-old twins. I’m solo with my kids most of their days since my husband is a hard-working provider of our family. I work from home, and the ratio is two kids to one parent on a daily basis. I’ve been fairly confident in taking care of two babies at once. Before we had kids, I was 8 years older than my twin sisters and spent many years babysitting and living with the two to one ratio.

And then my twins turned into toddlers. And now I live in daily fear that I will be alone with them in a public setting and they will go running in opposite directions.

I’m going to show a nasty side of myself, okay? No judgements? {Who am I kidding, it’s the internet.} My entire life, when I saw a child tethered to their parent, it made me think less of the parent. I would think it was lazy parenting that they couldn’t teach their kid to behave and stay next to them.

Because of my irrational judgement of others, I was refusing to do something that would open up a whole new world for me and my kids. My judgement was hindering me from experiencing the world with my toddlers who need that exploration. Instead of going out in public where they could explore new senses, new sounds, and new environments, we were confined to the fence of our own home, the safety of known, restricted territory.

I began to entertain the thought of potentially using a safety harness because I wanted so bad to take my kids out by myself but didn’t feel secure on my own. I asked for opinions and wisdom from mom friends further along than I. Every one of the moms I talked to encouraged me to go for it. They had used tethers for their kids, and it wound up being something the kids found fun! Or if they didn’t use tethers, it was because there was an age gap where the older siblings could help corral the toddlers.

The biggest encouragement I received sniffed out the root of my issue; I needed to not care what people think. I’m not abusing my children, their learning isn’t restricted, the discipline of teaching them to stay next to me in public isn’t being hindered…

I’m simply creating an environment where I’m confident as a parent to let my kids be kids while keeping them safe and secure.

Before we started using the tethers, we took those off and let them use their backpacks by themselves. They carried them to the nursery at church. They used them as their own little diaper bags in public, complete with diaper, wipes, sippy, and snack. We allowed them to make it their own, to get excited about them, and to gain some pride in the bag they carried. They loved being in charge of their own belongings. And once they got the hang of wearing the backpacks, I began using the tethers. 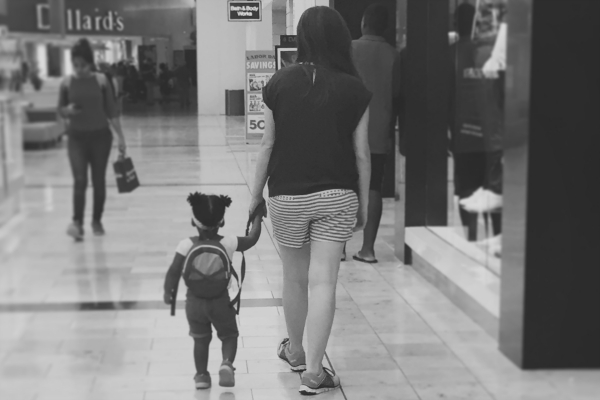 Now, the kids LOVE their “bap-paps!” I mean, they want to wear them all. the. time. We can go on a trip to the zoo and they can experience the animals instead of being stuck in a stroller. Even tasks so simple as letting go of their hand at the register at Chick-Fil-A to pay for our food and not worrying about them running off make the daily living and parenting so much less stressful! I can teach them to stay next to me, but if they don’t listen {which at 21 months it’s highly likely}, I have a tether from keeping them from running into traffic.

While a safety harness may ease my mind, we still must be aware that there are bad people in the world. A safety harness just means I can simply let them explore without fear of running off without me. That doesn’t mean they’re unsnatchable. Believe me, I’m a worst-case-scenario kind of gal. I keep my guard up to protect them from others.

But for so long I was worried that a tether was an excuse for lazy parenting when really, a tether at this stage in my twins’ life allows me to be a better parent by giving them the safe dose of independence they need.

And I can’t wait for our next adventure!

Do you use a safety harness with your kids? If you do, what was their reaction? Did you find a reaction from others? If you don’t use it, what is your reasoning? I’m so interested in others’ experiences and points of view!