The last Saturday in June, my oldest son Zach and I got dressed up and headed downtown to Jones Hall. We were headed to see Swan Lake put on by the Houston Ballet. If you are thinking my son is a} into dancing and/or b} classical music you would be incorrect {not for want of trying}. BUT he did go to sleep as a baby listening to the Tchaikovsky soundtrack for Swan Lake, so when I saw the Houston Ballet was performing it I asked if he wanted to go. I assumed I would get a hard pass from my outdoorsy kid, but surprisingly he said sure!

Cut to us sweating in our finery waiting to get into our seats.

To tell the truth, this was only MY second time at the ballet. I took ballet all through elementary and middle school, but had only been to one show since. It was the first year Alex and I were married and I thought we should go together {oh baby Kinsey…} and he almost slept his way through. I have been on a bit of a ballet break since then.  It was safe to say, I was not sure what to expect either! 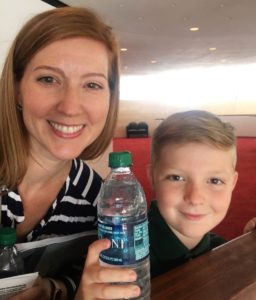 We hiked up to the balcony, immediately bought a bottle of water and went to find our seats. As we sat down we looked around at the lovely interior of Jones Hall and noticed one glaring thing. There were NO boys. I mean, OK, there was Zach and the two boys on the other aisle, but otherwise ZERO boys in attendance.

As someone who likes to push things {I like to joke I am going to infiltrate the all-males group in our local little league} I felt smug and proud that I had brought MY son. Quickly followed by a horrible thought:: What if there was a reason there are no boys in attendance? What if he hated it? What if he tried to talk to me the entire time? How long was this thing anyway? 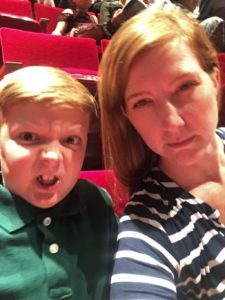 Ummmmm LONG. Really, really long. BUT he was great. And he did talk to me the entire time, but quietly. And he did not hate it. At all!

Swan Lake has a large male dancing population, like huge. There is a whole scene where at least 20 men fill the stage and dance. When I pointed out that the back row of very tall men were doing double 360 turns in the air he commented “They are so quiet when they land!”.  We marveled at the strength it takes to jump that high and to hold up all the girls.  We talked about how it is different strength than kicking a soccer ball or being a line backer. Different – but not bad. 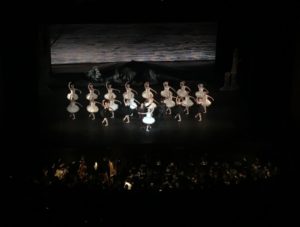 It was fun to read the program and then see how the dancers acted out the story. Using your brain in that way has to be good. Spoiler – he did not like how they died at the end. He wanted them to fall down and it be very dramatic {they just leapt that black thing in the back, landing off stage} but otherwise, we both enjoyed ourselves.

Guys, I am here to tell you to take your boys to art stuff! They might just surprise you. When you do go here is my advice ::

Living in and around Houston we are SO lucky to have amazing venues, at all price points to expose our kids to the arts. I am on a roll now and need to get my seven year old exposed. HMB has a great rundown of events in September, and there is a lot of performing arts on that list. Then, let’s both check out Visit Houston’s A-Z list of all that is going on in the city and find something for our boys!

PSA :: The one true benefit to having boys?? No line for him at the restroom. 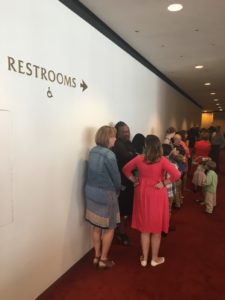